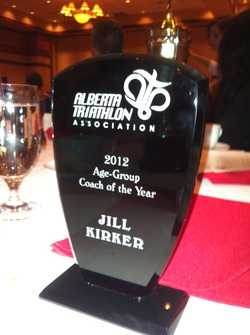 The ah ha moment......“In a personal growth program many years ago, I was asked to write out all the roles that I have in life.  My list included mother, daughter, wife, employee, volunteer, etc. But I had an epiphany that day.  I recall writing down and acknowledging for the first time “I am an athlete, and more specifically, a triathlete”.  As 40 year old gal who had never participated in organized sport or was never part of a sports team, this was big news; I found the triathlete within.  Now as a triathlon coach, I can help others along the path of triathlon training, personal and physical development and helping them find the triathlete within.”
- Coach Jill

Unlike many athletes, she was not involved in sport as a child. Instead, she learned to swim in a ‘terrified’ adult course. Jill did her first triathlon in her 40’s and like most athletes, moved up from the sprint distance to the Ironman distance. She progressed from being the slowest in the pool and on the bike to being a world-class age grouper.  She has raced World Championships at the Olympic, ½ Ironman and full Ironman distance races.  Beyond her results, Jill has a passion for helping others along their journey to achieve their own personal fitness and triathlon goals!


Jill has completed the National Coaching Certification Program for Introduction to Competition, and trained as an Alberta Triathlon Official.

Jill was thrilled to be selected as the ATA Age Group Coach of the Year in 2012.  "This is quite an honour.  Leading spin classes, helping triathletes become more efficient swimmers, working with athletes to more closely define their fitness and race goals make my role of coach enjoyable each and every day.  Thanks to all of you who have engaged me to help you find your "triathlete within".